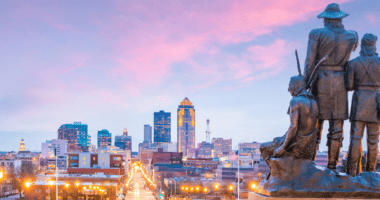 2022 gubernatorial elections might not be on the minds of many Midwesterners in the US in May. However, the way they vote in November could determine the course of gambling expansion in three Midwest states.

In all three of these states, recent legislative efforts have dealt with online gambling. They all could see renewed efforts in their next legislative terms, perhaps with new occupants of their chief executive offices.

This is the third of a four-part series that looks at the most important of those races in regards to legal gambling in the US . The first installment covers elections in the southern US , while the second looks at the same in two northeastern states . 2022 elections for governor in the midwest

To be thorough, these three states aren’t the only Midwestern states with gubernatorial elections this year . Kansas is also among those, as is Wisconsin.

However, these three states are among those where gambling issues are most likely to become an important debate the respective legislatures take up after these elections. Thus, the next governors in these states could hold a lot of sway over what, if anything, happens there.

In two of these states, the incumbents who are running for another term have held office during significant expansions of gambling already. In the third, the incumbent might prove the lesser of two evils for gambling interests. Will the Pritzker administration in Illinois endure?

J.B. Pritzker has been in office in Illinois since 2019 and has overseen the largest expansion of gambling in the state’s history. That included new brick-and-mortar Illinois casinos , retail sportsbooks, and online sports betting.

As the conversation has turned to iGaming legalization in the state, he has avoided taking a stance on that issue, however. While Beverly Miles will mount a primary challenge to Pritzker this summer, it does not look like Pritzker’s lack of messaging on gambling will affect that race.The Illinois Republican primary field is one of the widest in the country right now, with nearly a dozen candidates. Among the contenders […]