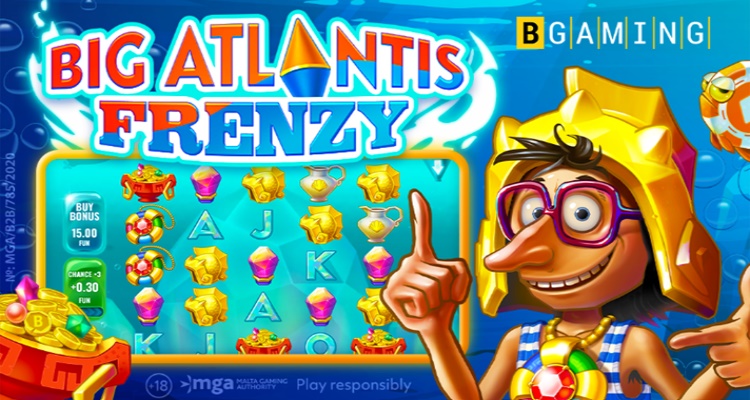 Malta-headquartered content provider BGaming’s latest slot release, Big Atlantis Frenzy, can already be found in select online casino game lobbies, and according to its developer, it “captures the best mechanics of fishing slots” and is “enhanced with a line of features that increase players’ engagement.”

Optimized for mobile, the medium-high volatility video slot is playable on all devices, offering 96.70 percent RTP and a maximum win potential of up to 4,320x the stake .

The charming underwater adventure follows the launch of Penny Pelican and is the sequel to Dig Dig Digger , which was launched by BGaming in June 2021 and was created in collaboration with Belarusian and Russian actor and TV host, Vadim Galygin .

Here, players are whisked away to the mysterious sunken island of Atlantis in search of riches, and with help from an eccentric underworld archeologist, who they will recognize from last year’s mining-themed release , hope to uncover some big wins!

Game Symbols & Features : Thanks to a unique “reel size change,” feature, players can choose a reel size from among 5×3, 5×4, and 5×5 , and the number of paylines that correspond – up to 20 – , as well as the win potential of their bet. There is a buoy located above the reels that will allow players to select the number of rows they prefer. The feature is in addition to the traditional Wilds, Free Spins and Bonus Symbols.

The game’s symbols, which appear to be floating in crystal blue waters, include icy blue J-A royals as the lower value symbols, while a vase, a bejeweled pendant, a golden helmet, a large gemstone, and a pot of gold comprise the premiums. The latter is the highest paying symbol in the game and is worth 100x the bet for five-of-a-kind. Winning combinations are formed by landing three or more matching symbols on adjacent reels, starting from the leftmost reel.

There are four wild symbols and each one shows the game’s main character with a different look. Wilds can appear on any of the reels and they replace all symbols except […]