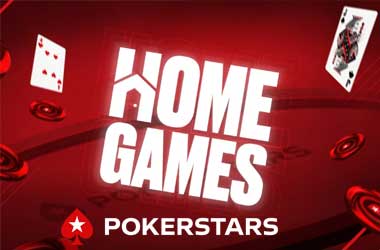 The new webcam feature is currently accessible to UK players

In December 2021, PokerStars launched in beta mode a new webcam feature for its Home Games across the dot-com and EU markets. The video chat integration, initially available in the web app, allows real-time face-to-face interaction between players.

After a successful trial that ran for nearly five months, the webcam tables have now been rolled out on the desktop client, with UK players becoming the first to enjoy the new exciting feature. They can also access the new function via the mobile app. Integrated Platform with Global Reach

PokerStars’ Home Games have remained popular among players and now the operator has upgraded the product, taking the home games experience to a whole new level.

Not only can players create their own online poker club, arrange their own private poker games and invite friends to play, but they can now interact with each other face-to-face and in real-time via the new webcam feature. The beauty in this new feature is that players don’t need to run multiple apps simultaneously to have that live-poker vibe. Video chat has been directly integrated into the tables, which means players no longer have to open an extra video-conferencing app/tool such as Skype or Zoom for real-time interaction, making the experience more seamless.

In addition to that, players have full control over the voice and video functions – they can mute the mic or turn off the camera as they wish, to protect their privacy and ensure security.

The new integrated Home Games platform also allows players to set up games that are not just limited to the local area. This means that even friends and online acquaintances based in other regions can join in on the fun, interacting with each other in real-time using the new video chat feature. Connecting People PokerStars isn’t the only operator that has embarked on video-chat integration. A few others had tried this feature in the […]